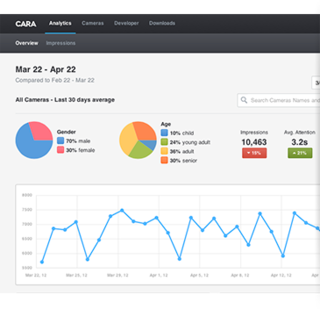 Facial detection software promises to shape the future of the marketing industry, but just what is all that data being used for?

Most people realize that once you step outside your home, you are being recorded on some camera, somewhere. But that's just the beginning of the story. Emerging technology is helping to turn cameras into intelligent sensors, ones that not only record you, but may know more about you than you know about yourself.

The vanguard of this technology set has already hit the market, starting with Cara, a facial detection software program that turns any web cam into a face detection system. IMRSV, the NYC-based company that just launched the program, says Cara uses algorithms to scan dozens of faces up to 25 feet away, and determine gender and age with up to 93 percent accuracy.

One of Cara’s first customers is Reebok. It has set up Cara on its shoe wall in the 5th Avenue store in New York City, gauging who’s sticking around and what's grabbing their attention. Data - 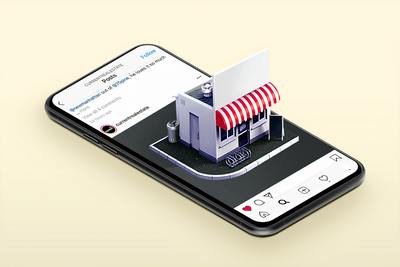 Despite the appearance of a silver lining in the financial cloud, budgets are still tight and most companies still need to do more with less when it comes to getting the word out about their products. In our experience, one of the most overlooked sales assets at many companies is the email list.

Yeoman has found that in a surprising number of companies, this list is collected and compiled and then left in a dusty hard drive somewhere. No one seems to own it - and worse – no one seems to know what to do with it.

The bottom line is that this is a dirt cheap (we’re talking pennies per contact) way to drive tons of qualified traffic to your main website. So, what should you be doing with your list?

Newsletters – Keep these focused on your products. Make it brief and to the point with links to deeper information on your website. Avoid fancy graphics and pictures that slow downloads and shrink open rates.

Email blasts – Save these brief missives for a new product release, a breaking ind

We here at Yeoman are very interested in how customers and prospects interact with brands online. Inc. Magazine recently ran an article on 4 new services that promise to measure your brand's social media influence- and presumably influence you to make some important decisions on how much hard cash to spend on soft marketing initiatives.

But can you really wrap numbers around activities designed to build brand awareness and consumer loyalty? Back when it was all "real-world" PR, sponsorships and the like, no one really bothered to try. Now that we can track and trace everything all over the web, we think we can (and should) build business cases for every moment of employee time that gets spent on brand awareness activities. The question is: are we getting smarter about measuring the results of social media or are we killing the goose just as it's laying the golden egg?

The answer, like your comany's Facebook status, is "it's complicated." Should you look beneath the surface and use som